One of the most special aspects of many English cities is how many of them still have areas that strongly resemble how they must have looked in Victorian times. Despite the onrush of modern architecture over the last 100 years, there are still plenty of prominent Victorian buildings that have stood the test of time to play an important role in 2019 England.

It’s fascinating to see familiar urban areas photographed in unfamiliar times and to imagine how different life must have been then. A new series of interactive images have been created to show iconic scenes from modern English cities transposed with how they used to look in Victorian times:

St Augustine Parade in Bristol has been dominated by St Stephen’s church for centuries and it’s a rare common factor in these photos of the street. So much has changed since Victorian times that even the River Frome is no longer in the modern day photo because it was covered over in the 20th Century, though it’s nice to see more greenery today than there was back then. Here’s an example of an area that has changed surprisingly little in the many years since the original photo was taken. Lime Street railway station and St George’s Hall remain in place and mostly unchanged, with the main differences between the two images being about the modes of transport used, with buses and cars replacing horses, carriages and trams. 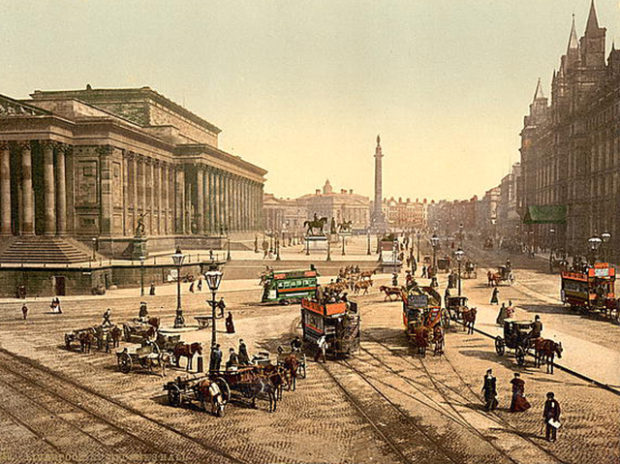 Victoria Embankment shows two major changes since Victorian times. One is that the trees on the bank have grown and the other is that Waterloo Bridge has been completely changed after being demolished in the 1930s. Something that is definitely still in place is the ancient Cleopatra’s Needle monument, which was gifted to the British government 100 years ago. The main difference between Victorian Victoria Street and 2019 Victoria Street isn’t hard to miss. In the old photo there’s a very prominent statue of Oliver Cromwell, which was meant to be placed in Manchester Town Hall, but was seen as too controversial, so ended up opposite the Cathedral instead. It then got moved away to Wythenshawe Hall in the 1980s. The Black Gate and Castle featured in the Victorian photo both remain largely unchanged today, with the County Hall (now a hotel) popping up between them one of the few signs of the passage of time in Newcastle in these images. The other obvious one in the foreground is how empty the road was back then, compared to now. In most of these images, there’s a lot more going on in the newer photos than the Victorian ones, but a major development at this spa in Scarborough makes it the exception. The main spa building looks mostly the same despite some renovations after a fire in the 1880s, but you can’t fail to notice that the Sun Court has been closed off to make for a more relaxing experience, which is why there’s no-one strolling past today. England’s seaside towns are often a barometer of how much – or little – things have changed, and this image from Worthing shows that its pier has undergone a lot of changes since the Victorian era. Indeed, in the modern photo you can’t actually see the pier, because of the ‘new’ Pier Pavilion (built in 1926). If you could see past it, much of the original pier and the South Pavilion have been replaced and rebuilt after damage from strong gales and a major fire. What do you make of the changes to these cities? Do any look better now than they did in Victorian times? Things Your Mum Will Love in London →