Namib – The Only Coastal Desert in the World

Namib – meaning “vast place” is the only coastal desert in the world. This is the oldest desert on Earth too. This enormous desert extends on 81,000 square km. It stretches for more than 2,000 kilometers along the Atlantic coasts of Angola, Namibia and South Africa.

Although now this desert is not inhabited, in the past there were temporary settlements near the big sand dunes.

This coastal desert is a home of many rare and unusual endemic species of flora and fauna, that survives with the help of the fog which is the only source of water.

In 2013 UNESCO declared this Namib Sand Sea as the only coastal desert in the world that have fog on the big sand dunes. This desert consists of sand seas near the coast and the sand dunes are so common here. Some of them are over 300 meters in height. 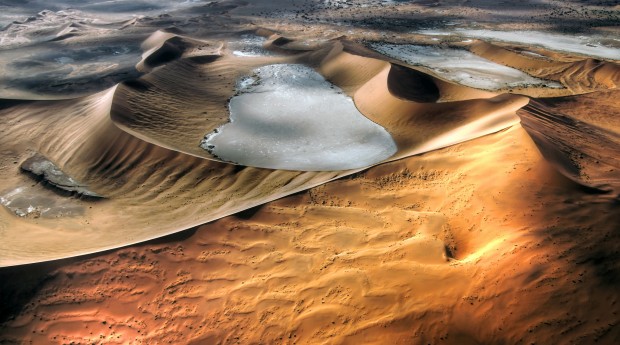 The Long Wall is a prominent coastal area of the Namib that runs along the Sperrgebiet in southwestern Namibia. This is the largest game reserve in Africa and one of the largest in the world. The most of this park is hardly accessible, but there are several well-known attractions. The most famous attraction is the Sossusvlei area. Sometimes the whole coast of Namibia is referred as Skeleton coast, but this is just the northern part of the coast of Namibia. The name is invented by John Henry Marsh as the title for the book he wrote about the shipwreck of Dunedin Star. Since the book was published in 1994 this coast became known for this name and soon it was official named. The Zeila got stranded on 25 August 2008 in the early morning hours near “Die Walle”, a popular fishing spot south of Henties Bay. Sossusvlei is a salt and clay pan surrounded by high red dunes. The name literally means “dead-end marsh”. With this name it can also refer to the surrounding area including Dune 45, Deadvlei and Hiddenvlei. By Ikiwaner (Own work) [GFDL 1.2], via Wikimedia Commons

Deadvlei is a white clay pan inside the Namib-Naukluft Park. The name neams “dead marsh”.  This is the place where can be found the oldest dead trees in the world. They died because there was not enough water to survive. This is a canyon that is about one kilometre long and 30 meters deep. It is located on about 4 km from Sesriem settlement. The Sesriem canyon is only 2 meters wide in some areas and has a portion that permanently contains water, which many animals use to survive.