Visit the Beauties of Neos Marmaras

More than 20 thousand tourists during the summer season visit the Greek town of Neos Marmaras. Marmaras is a real Mediterranean town, situated in Sithonia, on the west side, between the coast and hills. If you have not visited this place yet, summer is the ideal time to go there and relive a relaxed holiday.

Like most other resorts of Halkidiki, Neos Marmaras will offer all benefits for tourists, ranging from excellent organization of the beach, through the rich offer of water sports and sports on the beach, together with a huge choice of taverns, restaurants and bars. You only have to enjoy your summer vacation. Neos Marmaras was founded in 1922 by refugees from the island of Marmaras. Since 1967 the city has settled a large number of immigrants from places Parthenon, which in 1970 completely abandoned their city and they all moved to Neos Marmaras. Neos Marmaras is the largest tourist resort on the west coast of Sithonia, one of the most popular places in Halkidiki. It is characterized by pine forests, crystal clear sea and the long sandy beaches where the party does not stop from morning to dusk. Beside two unforgettable beaches in the town and a number of smaller beaches in the area, there are plenty of places for night life. Because of its hilly area, a real pleasure for lovers of long walks and abundant wildlife. Sea extends a length of three kilometers. The promenade along the coast is beautiful. 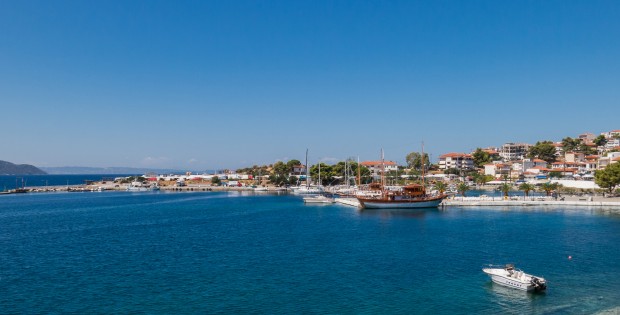 Immediately below the city beach is Porto Carras, super luxury yacht club in northern Aegean, located in the bay behind the big luxury hotels. In the restaurants and crowded shops you can listen Greek ethno music. In the market trade you can find olives, domestic wines, ouzo, almonds, Continental vegetables, Mediterranean and tropical fruits, spices and local cheeses. Everything is halfway cheaper than in stores. That town breathes with tranquillity and it is surrounded by churches. Residents deal mainly with agriculture and fishing.