Paris – city of light, love and wine is the most romantic city in the world. Good wine, nice coffee and sights on every corner will imprint in you memory. If you ever go to Paris, take a time to enjoyment, but also you will need an extra hours to visit many places offered by this town. The annual number of over 45 million tourists makes this city most attended in the world. If you have chance, see all cultural, historical and artistic sights, as well as parks and other attractions, but be sure not to miss the cathedral Notre-Dame.

Located on the eastern half of the Île de la Cité in the fourth arrondissement of Paris, this cathedral is the most beautiful example of French Gothic architecture. According to the Tourist Organisation of Paris, tourists prefer to see the beauty of the old cathedral than to embark on the Eiffel Tower. That is real proof that the cathedral is really famous.

The cathedral Notre Dame is church of Roman Catholic worship where a lot of Christians comes to pray. But no matter of that it opens its doors to everyone who is willing, for believers or not. Every day the cathedral is open to visits that are organized in various languages. That is how a spiritual message is send to all whose enter its doors. The cathedral was built in 1163, during the reign of Louis VII. During the construction period, the project was been worked by numerous architects. The Gothic masterpiece became the prototype for future cathedrals in France. The construction of Notre – Dame is 128 meters long and its towers are 69 meter tall. A spire was added in the nineteenth century and it reaches 90 meters. Cathedral has the most spectacular and outstanding windows. They are large and rose. The west window is 10 meters in diameter, the south is 12.9 meters and it is composed of 84 panes of glass. The north is also 12.9 meters in diameter. All of them are exceptionally beautiful. The cathedral’s has 10 bells and the most famous “Emmanuel” is situated in the south tower. It weighs 13 metric tons and been recast in 1631. All the portals of Notre Dame Cathedral are magnificent examples of early Gothic art. 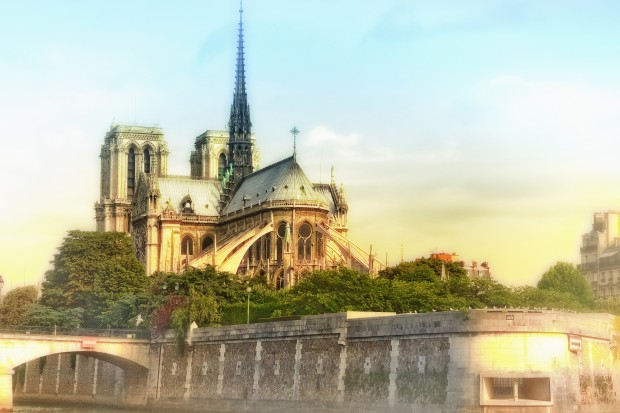