Paris is one of those cities that seems to be on everybody’s bucket list. The city is famous for its culture, its cuisine, and of course, its title as ‘the city of love’. So deeply do the expectations of Paris run that tourists – bizarrely, almost always Japanese – who are so disillusioned upon their arrival to Paris, suffer a psychological breakdown. Most who make it there, however, will find that Paris does offer just the kind of experience they are hoping for.

In order to make the most of whatever time you have in Paris, it will help if you spend some time beforehand working out what you want to do when you are there. There is a lot to be said for spontaneity, especially when on holiday, but you also don’t want to find yourself standing in Paris without a clue of where to go.

We have compiled this list of 5 of the most important things to know for first time visitors to the city before they depart.

English is Widely Spoken, But Learn Some French Anyway

As with most European capital cities, the citizens of Paris have an excellent grasp of English. However, while many people will be able to communicate with you in your own language, they will often try to speak to you in French. If you launch into a conversation with the assumption that your interlocutor can understand you, this can seem very presumptuous. After all, when you’re wandering around your home city, you might feel a bit taken aback by a stranger approaching and trying to speak to you in another language. If you at least try to talk to the locals in French, they are more likely to be accommodating. If they can tell that you are struggling with your French, they will be all too happy to slip into English, and maybe even show you where your French is going wrong. The two most common reasons that holidaymakers don’t pick up any French before they leave is because they assume that either they lack the skills to do so, or they don’t know how to access the relevant resources. One of the best tools available for learning a language is Duolingo. Through either the website or the smartphone app, you can learn the basics of just about any language you like.

Tipping is one of those traditions that varies considerably across the world. In some countries, notably the United States, tipping is expected. However, in France, like the UK and other European countries, generally tips are given according to the level of service received. If you are particularly impressed with the service you receive, be sure to leave a tip for your server. Because servers in Europe are not always routinely tipped, when they do make them it can really brighten their day. The amount that you tip is up to you. In the UK, we generally tip as a percentage of the bill, usually 10-12%. You can leave the same size tip here if you like, but French servers will often be happy with the gesture as much as the cash. In the EU, waiting staff in restaurants are paid the minimum wage (at least) and their tips are bonuses on top of it. This contrasts with non-EU countries like the US where tips are a crucial portion of a worker’s wages. You should note that most restaurants and cafes in Paris will include a service charge as part of the bill by default. So, if you see this on your bill, remember that it is different to a tip. Outside of restaurants and cafes, the other place you are most likely to tip is if you catch a taxi. Uber has gained a great deal of popularity in Paris, and the drivers are known to be friendlier. If you do take a cab and find your driver to be particularly helpful, a tip will certainly be appreciated.

The reputation that Paris has for its cuisine can sometimes be intimidating. This is a city which is renowned around the world for its fine food and for turning eating out from an activity into an experience. Therefore, the casual diner might be afraid to explore the eating options in depth, fearing that they lack the palette or the means to appreciate fine French cuisine. 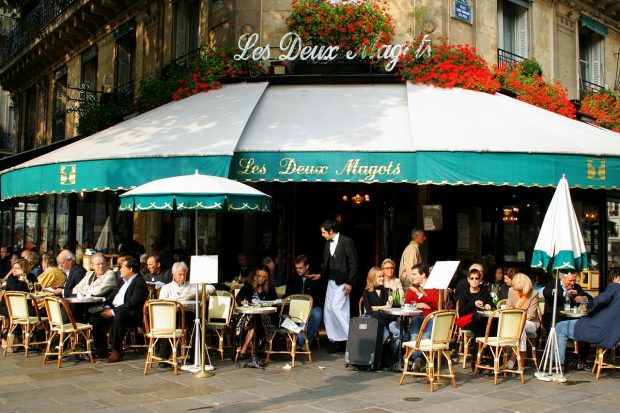 The good news is that there has been a noticeable shift in Paris over the last decade or so. The dining experience in the city is now much more casual and far less intimidating. Sure, if you are looking for a really upmarket and distinctly Parisian dining experience, there are plenty to be had. But the city overall is now far more accessible to newcomers. Unlike in the UK, where the opening times and meal times of restaurants and cafes are left to the whims of individual owners, the vast majority of Parisian restaurants used standardised timings. Lunch runs from midday to 2pm, while dinner starts at 7pm and ends around 10:30pm. There are a handful of restaurants in the city which are open all day, but these are generally best avoided as most are known as tourist traps. If you find yourself getting hungry while the restaurants are closed, find the nearest bakery and make your own delicious meal. You will find excellent quality bread, cheese, and meat fillings to make sandwiches with ease throughout Paris.

What Sights to See?

Paris is home to a number of instantly recognisable, world famous landmarks. Most prominent amongst these is of course the Eiffel Tower. The city is devoid of skyscrapers, with the ground beneath the city unable to support the weight of such large and heavy buildings. This has left the iron structure of the Eiffel Tower as the most prominent feature of the Paris skyline. The Eiffel Tower is by no means the only thing to see in Paris, there is also Notre Dame cathedral, the Louvre Museum, and the less known but just as important Orsay Museum. There is no denying that seeing these sights is worth your time but doing so will cost you money. By taking advantage of Fast Pass Tours, you can gain access to multiple sights and attractions for a discounted price. Of particular note is their ‘Skip the line Eiffel Tower Tour’, which allows you to bypass the inevitably long queues to ascend the structure. Fast Pass Tours manage to cover all of Paris’ main attractions, so they will certainly be able to help you spend money on seeing the sights that Paris is best known for.

Store opening times work a little differently in France then they do in the UK. Most shops will be shut on Sunday in France and any grocery stores or supermarkets that are open will usually open their doors around 12:30pm. You should do all your important shopping on Saturdays, and this includes medicines. While pharmacies in the UK usually close on Sundays as well, in France these are the only places where you can purchase medicines, even non-prescription medicines. Paris is a city that everyone should experience at least once in their lifetimes. You probably have a whole bunch of ideas and notions in your head about what Paris is like, but only by going there will you be able to truly appreciate it.