Sri Lanka is an island country in the Indian Ocean. It is located on the southern coast of the Indian subcontinent in Asia. It was known as Ceylon until 1972. With a great climate and beautiful nature, Sri Lanka is a great place for travelers. Also you can find amazing sandy beaches, green areas and waterfalls in Sri Lanka.

The history of this island dates back from 125,000 to 500,00o years ago. In each period and era many different events have happened and the culture has evolved.

This country is small but has the highest biodiversity density in Asia. 27% of 3,210 flowering plants and 22% of the mammals that live in Sri Lanka are endemic. Because of the wide range of native species, Sri Lanka has declared 24 wildlife reserves.

There are more than 50 waterfalls in Sri Lanka, but here is a list of 6 that are the most known and beautiful.

Ravana Falls is one of the 6 most known waterfalls in Sri Lanka. It is currently ranked as one of the widest falls in the country. It’s height is 25 m (82 ft). It is named by the legendary king Ravana which is connected to the famous Indian epic, the Ramayana. 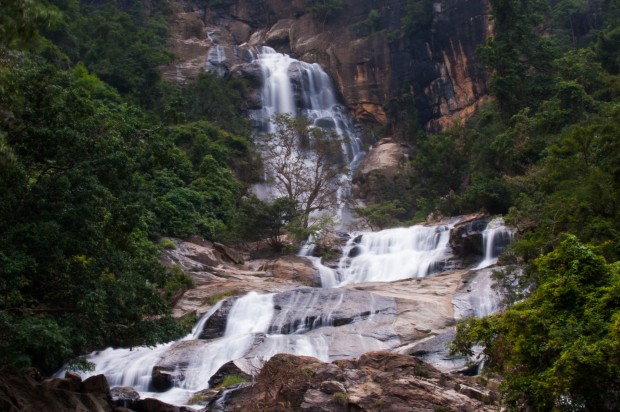 Diyaluma is another of the waterfalls in Sri Lanka. It height is 220 m which is the second highest waterfall in this country. It is located 6 km away from Koslanda in Badulla District. The name in Sinhalese language means “rapid flow of water”. This waterfall is situated 5 km from Badulla town. This is one of the most beautiful waterfalls in Sri Lanka. Its height is 64 m (210 ft) and gets its name from the smoky dew drops spray (Dun in sinhala means mist or smoke). Devon which is name of an pioneer English coffee planter is credited for naming this waterfall. Thats because his fields was near the waterfall. Devon Falls is 97 m high and are located on 1,140 m above the sea level. One of the widest waterfalls in Sri Lanka, St. Clair’s Falls are called the “Little Niagara of Sri Lanka”. Just 3 km west of the Talawakele town the falls is 80 m high. Bambarakanda Falls is the highest of the waterfalls in Sri Lanka. With height of 263 m (863 ft), it is ranked as the 299th highest waterfall in the world. Things to do on a Family Trip to Sri Lanka →