An ethnically and culturally diverse country, the United States prides itself with its creativity, style, and colors with its various stunning architecture.

From modern to eclectic, conventional to futuristic, the US is home to various innovative and stunning architecture.

These structures managed to capture the aesthetics of its designers, its periods, as well as the personality of the place. From unique concepts to breathtaking skyscrapers, here is a list of the stunning architectural marvels that you should visit in the US on your next trip.

The Golden Gate Bridge is a beautiful and iconic bridge in the country that spans about 3 miles long and found in-between San Francisco and the Pacific Ocean. Nestled in the beautiful city of San Francisco in California, this orange-colored bridge joins the northern tip of the San Francisco Peninsula with the Marin County. The second-longest bridge in the country echoes an art deco theme. Rising 4200 feet, this bridge used to be the world’s longest suspension bridge until 1964.

Considered as one of the top ten achievements in the 20th century in the world of construction, this structure has appeared in numerous movies and photographs. The bridge was first opened in 1932 and took only about 4 years to construct.

Found in downtown Manhattan, the Empire State Building is considered as one of the most iconic buildings in the world. This art deco skyscraper was designed by Shreve, Lamb & Harmon and was finished in 1931.

This ended the city’s skyscraper rivalry when the Great Depression started to hit. Over the years, the building became a symbol of perseverance and strength. It has also been immortalized many times in several movies over the years. Towering with a total height of 443 meters including its antenna spire, this stunning masterpiece remained the tallest building in New York for decades until the original World Trade Center’s North Tower took over its place in 1970. The spire of the building was originally meant to be utilized as a  depot for dirigibles and mooring mast, but that idea was eventually dropped after a few attempts since it proved to be dangerous.

The building was named after the very city that it stands in New York, the Empire State, the towering structure has an observation deck that gives visitors breathtaking panoramic views of the city. Check out when’s the best time to visit Manhattan.

The White House is the President of the United State’s workplace and official residence.That’s why this structure found in Washington DC should be on top of your must-visit list.

The building was built by the Irish architect James Hoban, patterning it with the Irish Parliament. The construction first started back in 1792, and then was finally completed during 1800. It was when the then US president, John Adams moved in. 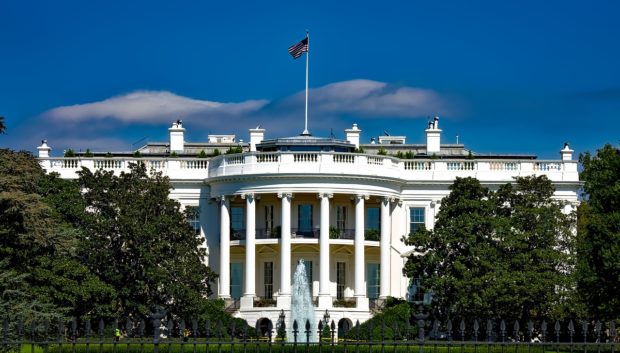 A year later, Thomas Jefferson succeeded him, adding horse stables and two concealed colonnades on the existing structure. After president after president has passed over the centuries, and passages and secret rooms were added.

The Space Needle is known to be the most famous landmark of the Pacific Northwest. First built in 1962 for the World Fair, Seattle’s famous monument has a stunning observation tower. The building is 605 feet tall and created to withstand earthquakes up to 9.1 magnitudes, as well as winds that run up to 200 miles per hour. Guests can enjoy the breathtaking panoramic view of the city from up above, as well as the Olympic mountain, Cascade Mountain, Mt. Baker, Mt. Ranier, Elliot Bay, and other surrounding islands in the area. The Seattle Space Needle also features a fabulous Sky City restaurant that rises up to 500 feet.

It’s easy to understand why the Gateway Arch in St. Loius, Missouri is one of the most popular attractions in the city. Towering about 630 feet in height, this stunning arch stands out from the rest of the city’s structures. The structure is made from 900 tons of stainless steel, and the arch is known to be a catenary curve ‒ one of the most structurally sound shapes of an arch. It was built to celebrate the westward expansion of the US and dedicated to the American people.

Designed by Eero Saarinen in 1965, the arch is found on the city’s riverfront, where guests can be elevated via tram to the structure’s observation area once they enter the base of the structure’s north and south leg.

The Statue of Liberty

This colossal neoclassical structure is found on Liberty Island in New York Harbor, and a gift to the country by the people of France.

The structure is a robed female figure that represents Libertas, known to be the Roman Goddess of freedom, holding a torch, and a tabula ansata- a tablet that evokes the law, where the date of the American Declaration of Independence is also inscribed. Not only that it became the country’s most iconic landmarks, but it became a popular tourist attraction over the years as well. Visitors going there can learn all about the history of Liberty Island, and be awed by the museums and exhibits in the area.

One can visit the Statue of Liberty Exhibit of the second floor of the pedestal inside the statue, or go on a self-guided audio tour that will take guests to key attractions and sites in the area.

This national memorial in South Dakota was carved into a granite face of Mt. Rushmore. It was first sculpted by Gutzon Borglum then later by his son, Lincoln. The United States is filled with historic monuments, while others hold the beacon of a modern architect’s creative mind. So, if you’re planning to explore the land of the free, make sure to visit some of these iconic architectural marvels in the US.