Whether it’s Shaun Connery or Daniel Craig, Bond isn’t the only star of a good 007 movie. There’s the leading ladies, the gadgets, the cars, and, of course, the locations.

HomeAdvisor decided to take a closer look at the architecture of James Bond, charting all the iconic buildings to appear in the world’s most famous movie franchise.

Breaking into Fort Knox was part of Auric Goldfinger’s plans to contaminate its gold supply, increasing the value of the bullion stashed in his own vault. But he couldn’t have picked a tougher target. This imposing art-deco fortress is impossible to breach. And so it should be. It houses 54% of US gold reserves. Based on the reclusive billionaire Howard Hughes, Willard Whyte appeared in Diamonds Are Forever. Like Hughes, Whyte lived in a hotel penthouse suite above a Las Vegas casino. The Westgate hotel and casino is a towering 375-feet structure with 30 floors and three penthouse apartments. At the time of filming, Westgate was the biggest hotel in the world. The United Nations headquarters in New York City is where Bond investigates the murder of a fellow agent in the 1973 installment Live and Let Die. At over 500-feet tall, the giant glass monolith is one of the most iconic skyscrapers across the Big Apple skyline. But as far as iconic Bond locations go, nothing compares to Mount Shinmoedake. It’s the extinct volcano that doubled up as the main base for the sinister SPECTRE organization in You Only Live Twice. Set designer Ken Adam spent $1 million transforming the interior into a high-tech supervillain’s lair. Verzasca Dam in Ticino, Switzerland, was the location for (arguably) the best opening scene in any Bond film. Pierce Brosnan introduced himself as the new 007 by bungee jumping off the 220m-high dam. Halton House appeared in Brosnan’s third Bond outing – The World Is Not Enough. Designed by members of the Rothchild banking dynasty, this unique English manor house coined a new phrase in architectural design: ‘le goût Rothschild.’ It describes an elaborate style of interior decoration defined by extravagant use of lavish fabrics, gilding, and ornate stucco ceilings. It became the hallmark of the American Gilded Age and continues to influence contemporary designers, including Robert Denning. 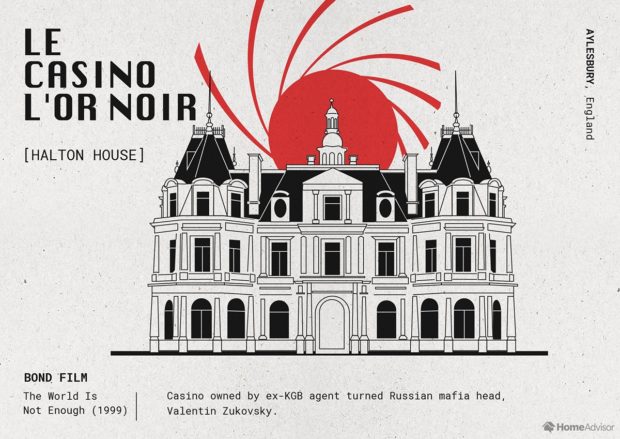