Picturesque Sites In Africa That You Should Pay A Visit

As a photographer, you need a keen eye for detail to get the perfect shot. As such picturesque and out of this world places do rank as your top destinations to capture amazing photos which sell your art.

Talking of destinations, Africa is one of the under-visited areas though it has of late been gaining much appeal courtesy of its vast wilderness and unique wildlife. Such a terrain makes the continent a perfect spot to get awesome shots.

Here are some serene sites in Africa that you can visit to up your photography game.

Cairo is the capital city of Egypt and a major tourist attraction in Africa owing to the pyramids and other structures constructed during the ancient Egypt civilization. The structures are very serene and stand majestically over Cairo’s modern skyline. Apart from the pyramids, the inner city architecture is also amazing with hints of both Arabic and ancient Egyptian influences. The Nile River which passes through the city is also an amazing scene for taking photos especially at night when the city lights put a galactic-like reflection on the waters.

Other places you can use as a background for your photos include the Cairo citadel, the khan en-Khalili, and the Qalawun mausoleum complex.

Timbuktu is a key area in the history of western Africa being a major educational center in ancient times. Apart from education it also doubled up as a trading hub. Iconic architecture remains to show off the grace this city-state once possessed. 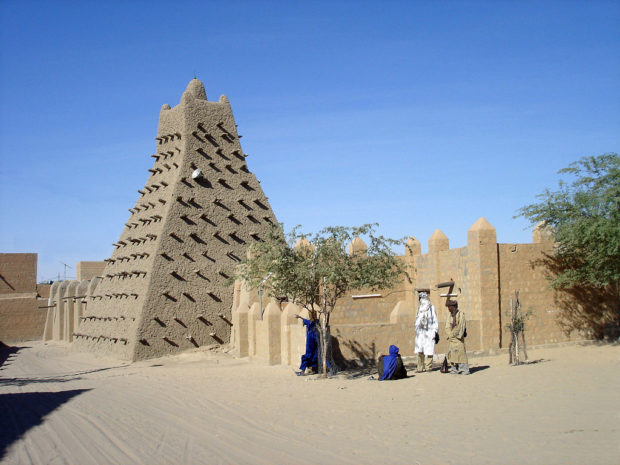 As a photographer, your point of interest lies in the mud-brick constructed mosque and the library. Though it has been renovated of late, the majority of the structure is as it was in the 15th century.

The rift valley is a physical feature prominent in eastern Africa extending to parts of North Africa. The massive valley is a photographer’s dream with lots of physical formations such as mountains, lakes, hot springs, and the pronounced escarpments. The eastern rift valley in Kenya is a nice hub with a vast wilderness with some parts being heavily forested and home to various animals. If you love animal photography this is a good place to start.

Great Zimbabwe ruins are evidence of the ancient African civilization dating to the Iron Age in the 11th century. The architecture of the ruins is very amazing and showcases the craftsmanship employed at the time to come up with such hardy structures. The ancient settlement is nice for taking unique photos owing to their distinct architecture with a background featuring a vast grassland.

Africa has a lot to offer to you as a photographer in the essence of shooting scenes. The destinations manage to be unique due to their history, architecture and associated physical features. The bottom line is there is a lot to feed your lens and bring out the best graphics. For more information on such places both in Africa and other places, check the other articles of our website.