How far would you go for a decent cup of coffee? Well, it looks like the researchers from CashNetUsa are prepared to travel to the ends of the earth in search of the perfect cup.  Using data from Tripadvisor, they recently put together a map showing the cost of coffee all over the world.

Here’s a look at some of their findings

Southeast Asia is a mecca for backpackers looking to experience different cultures. But there’s one creature comfort nobody wants to leave behind – a decent cup of coffee. Thankfully, coffee is a vital part of life across the region. Travelers with a smaller budget should head to Nepal or Vietnam, where a caffeine boost costs less than $2.00. Things are a little different in South Korea. The average price of a coffee in the capital city Seoul is $7.77!  But you’re paying for more than just beans. Seoul is famous for its themed coffee bars, like the Nature Cafe. It has two resident sheep that wander around the table as you sip your latte.  That’s right; we said sheep. Cafe culture is a big part of life in Europe’s top travel destinations, including Rome, London, and Paris. These cities have a reputation for being pricey. However, the large number of coffee shops means you won’t have to pay more than $4 for your favorite hot drink. 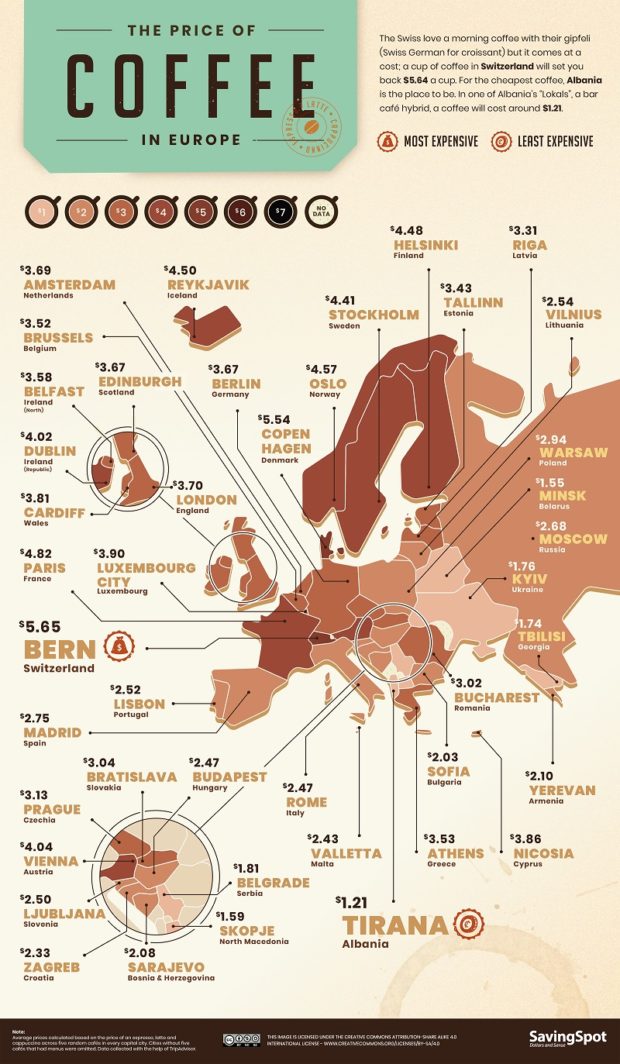 You’ll find Europe’s cheapest coffee in the Albanian ‘Lokals.’ These cafe/bar hybrids serve up a steaming cup for just $1.21. Try a Kanojët while you’re there. It’s a small, fried pastry filled with sweet cream. Going straight to the source

No global coffee tour would be complete without a trip to South America.  Colombia,  the world’s largest coffee exporter, has the lowest coffee prices across the continent.  A mug costs $1.27. Brazil exports $4billion worth of coffee annually, and it keeps plenty for itself. Even in cities like Rio De Janeiro, you’ll never pay more than $2 for your morning shot. South America is the perfect destination for coffee connoisseurs. Look out for anything made from Brazilian Café Pila beans. They create a full-bodied coffee with a sweet, fruity twist. You won’t find flavors like this anywhere else. Where it all began

Coffee drinking began in the Middle East during the 15th century. The word coffee comes from an old Arabic word that translates as special wine.

Coffee is still sacred in Middle Eastern countries and is an important part of hospitality rituals. Saudi Arabians offer coffee and sweet dates to strangers passing by their houses.  Travelers should take advantage of this generous hospitality. Sitting down for a cup in Riyadh costs over $5. For a discount cup, head to Iran, where you can buy an espresso for under $1. But be prepared: Iranians like their coffee super strong. Some say money makes the world go round. Others think it’s love. But how much would really get done without the black stuff to keep us going?  Because as the saying goes: it’s coffee first,  everything else later. How Can a Travel Agency Help You Plan Your Trip on a Budget? →