Why Bologna has 7 Different Names

Among all Italian cities it seems that only Bologna can boast of so many different nicknames.Â Some people call Bologna “Red” (la rossa) due to the large number of ancient buildings with the red tiled roofs. The European oldest university operating in Bologna is a good reason to call the city “Erudite” (la dotta). And delicious cuisine represented with mortadella, tortellini and all kinds of pasta make Bologna famous as “Fat” city (la grassa). In fact, each tourist, after visiting the city, will remember its own Bologna, and the city nicknames could be countless. For instance, someone can call Bologna:

…the city without the sky

Endless porticos with marble floors and gracefully painted ceilings are one of the main features of Bologna. Even in the hottest heat, you can take a pleasant stroll through almost the whole city staying in the cool shade of porticos. 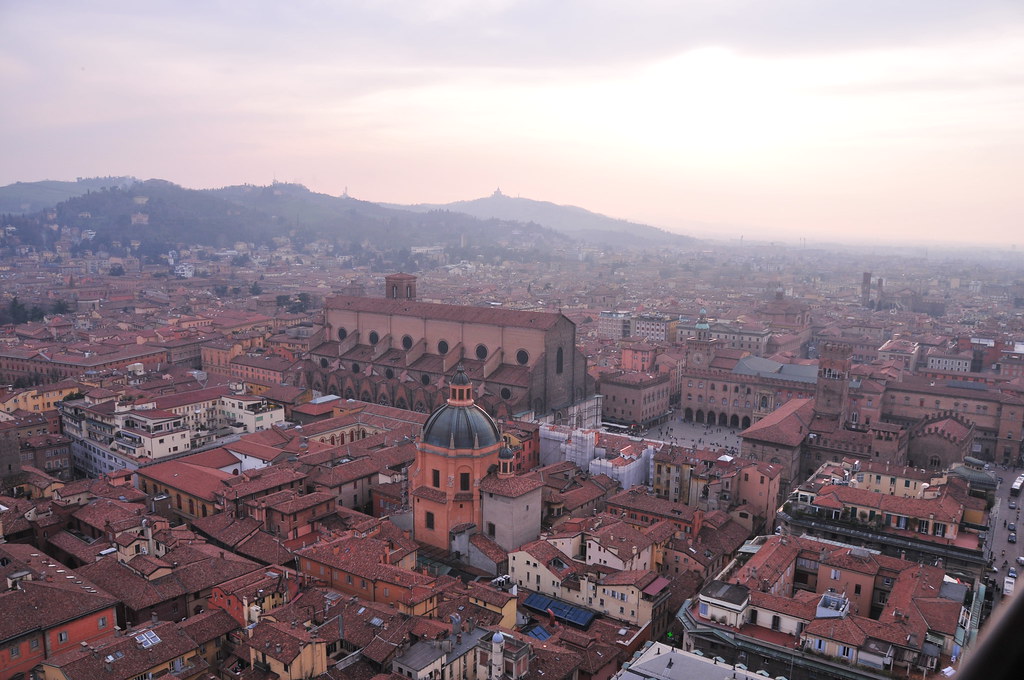 You might even get an impression that Bologna is devoid of sky, since almost every sidewalk is completely covered with arcades.
In fact, Bologna is the city with the longest arcades in the world! In total they have a length of about 40 km, whereas the closest competitor Swiss city Bern can boast of only 8 km of arcades. 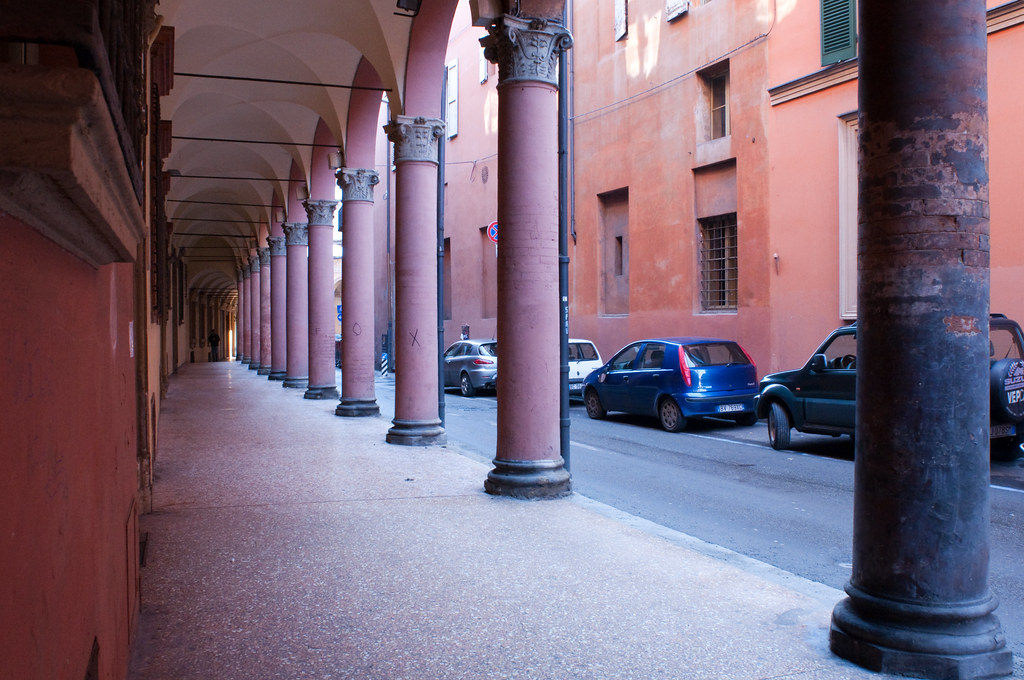 Thanks to numerous picturesque porticos, Bologna looks like a one big open-air museum. Despite its large quantity, porticos don’t create an impression of monotony, since they were built in different architectural styles in different historical periods.

While wandering through Bologna streets, you’ll even notice the oldest arcades with the wooden columns. Pay special attention to the ceilings. Some porticos are richly decorated with ancient paintings or stucco molding by famous Italian artists. 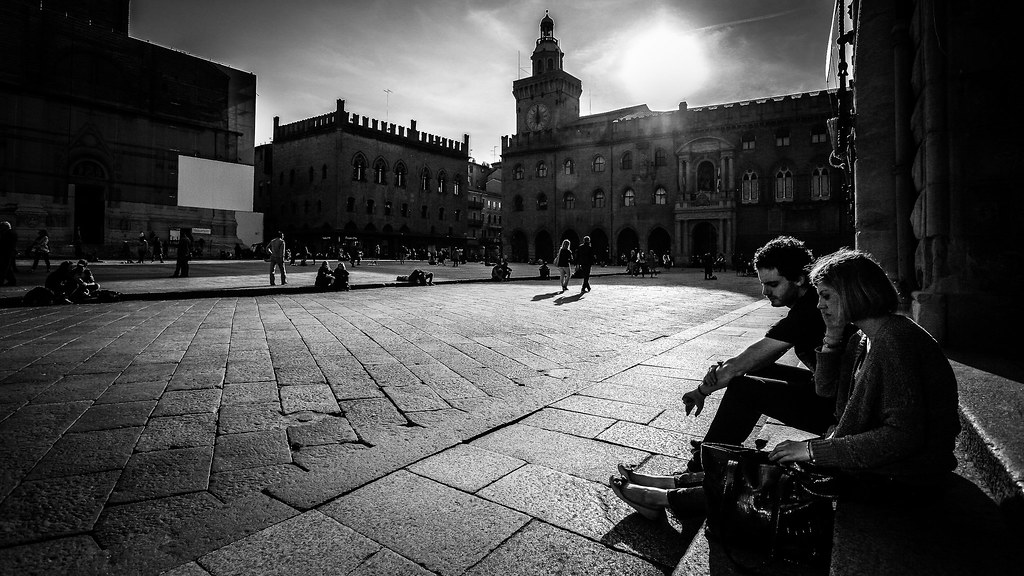 It’s interesting to know that absolutely all porticos in Bologna have a minimum height of 2.66 meters which is equal to the height of average rider on the horse. Another curious fact is that the longest portico in Bologna, leading to the Sanctuary of Madonna di San Luca, consists of exactly 666 arches.

…the city of towers

Although most people think there are only two towers in Bologna, their actual number is 21. During the Middle Ages, there were probably 80 or even 180 towers (scientists still can’t reach a consensus on their exact quantity). Reasons of construction of such towers aren’t clear either. According to the one version, towers were built in defensive purposes. But some historians also think that towers had social value. Only the wealthiest families could afford to build tall towers. Nowadays, the most famous towers in Bologna are Asinelli and Garisenda. They are located close to each other and have a height of 97 and 48 meters respectively. Even with the naked eye, it’s quite noticeable thatboth towers are slightly inclined. In fact, the Asinelli Tower, having a tilt of 2.4 meters, is considered the highest leaning tower in the world.

Bologna residents have no idea why tower in Pisa is more recognizable, although it is only 57 meters high and technically isn’t tower at all, but a belfry.
The Asinelli Tower is open for all comers. It’s quipped with an observation desk offering the best views of the city. The admission isn’t free. But a small fee of about 3 EUR is definitely worth those feelings you’ll experience while climbing 498 wobbly wooden stairs inside the narrow almost thousand years old tower!

…the city of scooters

Almost on every street and every square, there are dozens of parked scooters. Perhaps, the main reasons of such abundance of scooters are quite narrow streets as well as ahuge number of students living in the city. Scooter is a convenient and easy to drive vehicle most young people can afford. 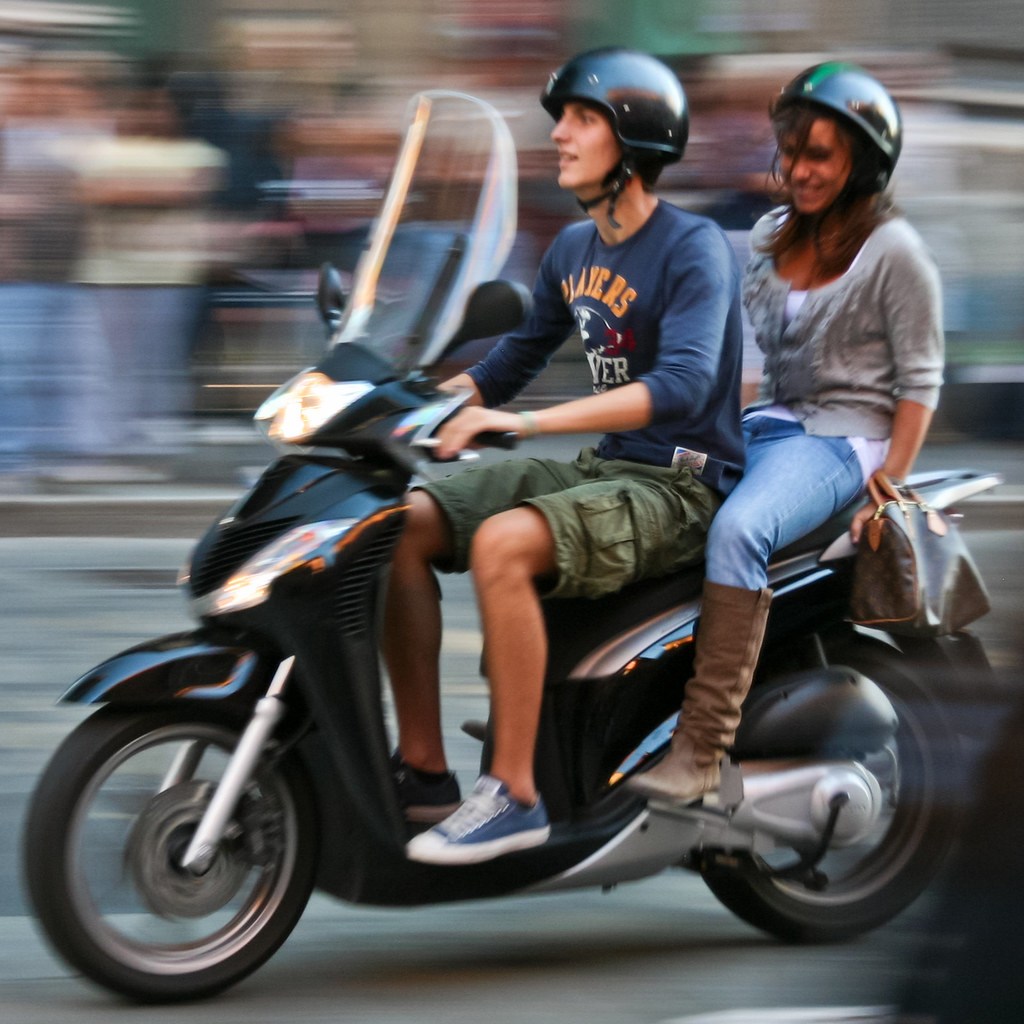 If you also don’t mind to explore Bologna and surroundings with minimal efforts, you can rent a car. As a rule, the widest choice of rental vehicles is at the airport. All types of cars from mini to luxury ones can be easily booked online in advance.

…the city of Lamborghini

There are two different museums dedicated to Lamborghini not far from Bologna. The first one is the Museum of Ferruccio Lamborghini located in 18 km from the Bologna Airport. The second one is the Lamborghini Museum at operating factory in 24 km from the city. Let’s take a closer look at each of the museums. 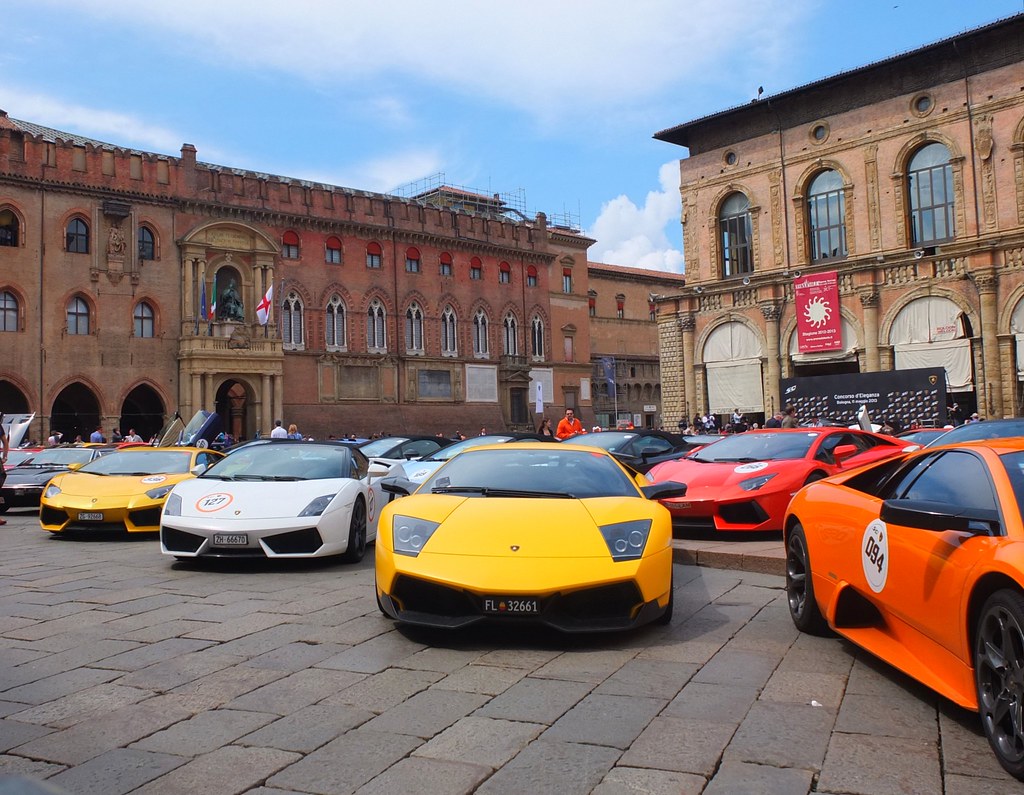 In the Museum of Ferruccio Lamborghini, you’ll learn more about the life of the brilliant designer who presented the world a huge number of various inventions from ordinary tractors to futuristic supercars. With the help of various rare car models and collection of photographs and original family items represented in the museum, visitor dives into the past and enjoys the results of the work of one of the brightest minds and innovators of the global automotive industry.
Among the main masterpieces stored in the museum are legendary cars Topolino Mille Miglia, Islero, Jalpa and Urraco as well as Espada 1968 with the four doors opening as the seagull’s wings. 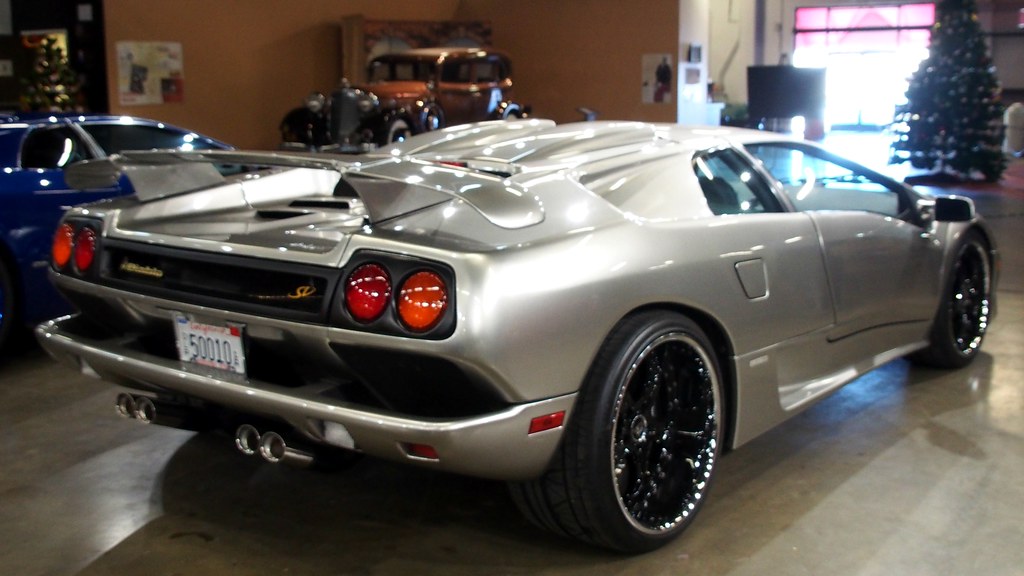 Whereas Ferruccio Lamborghini Museums is designed in honor of the genius inventor, the Lamborghini Museum located at the factory in Santa’Agata is dedicated firstly to the sports cars themselves. Here you’ll see the very first model assembled by Ferruccio himself, first car that overcame the barrier of 300km/h and a collection of the most successful Lamborghini cars.
For additional fee, visitors can also enjoy an excursion on the factory itself. Moreover, there is even a service station where only factory mechanics work. 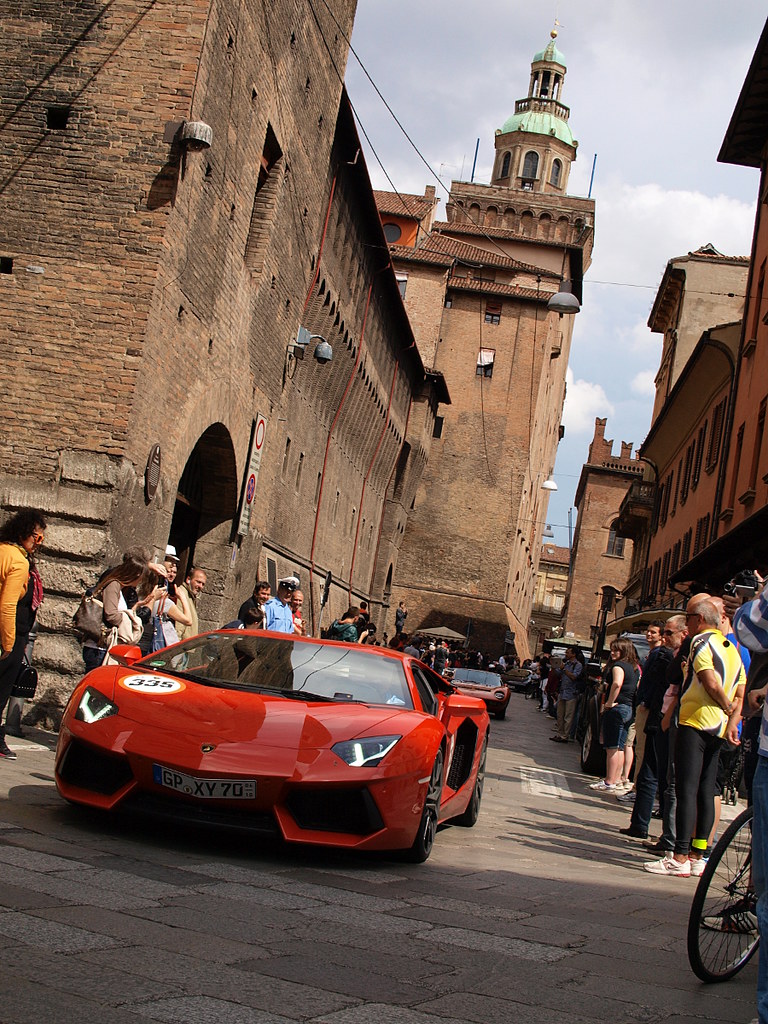 In 2010, the world’s first ice-cream museum was founded in Bologna. It offers an exciting way to get acquainted with the history and production technology of this wonderful treat. Thus, many city visitors have already remembered Bologna as a place where they made their first real ice-cream. And there is a chance that very soon Bologna will get its next nickname of the city of ice-cream. 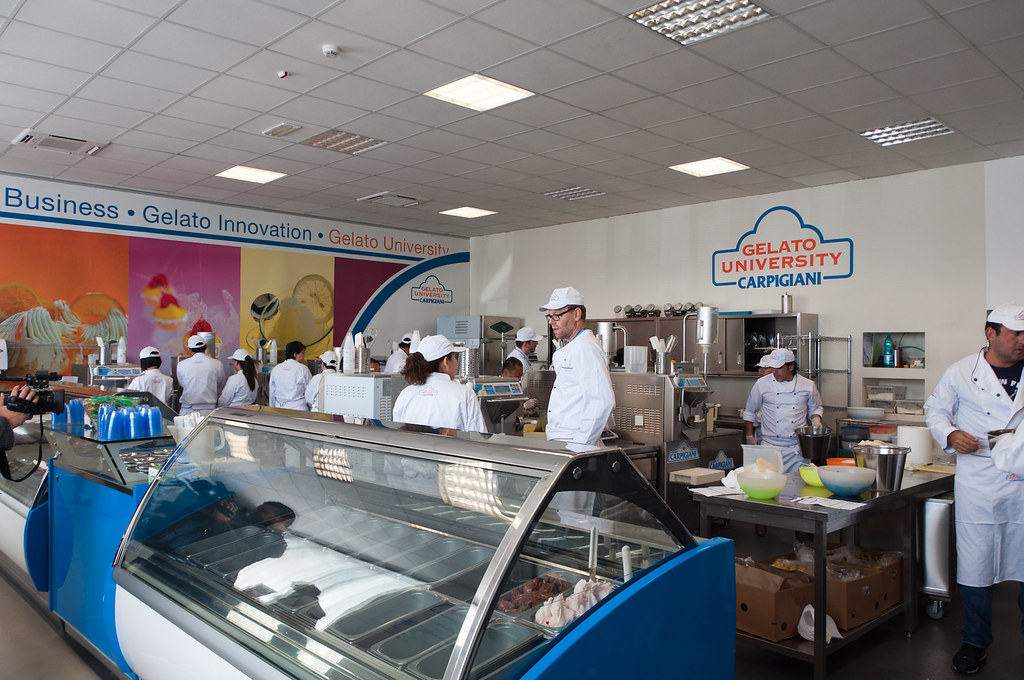 The list of Bologna nicknames can consist of countless lines, since the city has many faces, and every its visitor will be able to discover a completely new Bologna. Perhaps very soon Bologna will get a new name as a city where you spent the most remarkable holiday of your life!

Lily Berns tries to provide readers with useful info regarding their travels. She likes to find special places for pleasant vacation in Italy.