The United States has some of the most famous landmarks of any country. Hollywood has made famous the country’s exteriors, from New York to Frisco, El Paso to the Missouri Breaks. But when we get a peek inside the buildings, it’s usually just a film set that may bear very little resemblance to the real thing.

Short of a tour around these often-impenetrable buildings, the closest you might come to seeing what’s inside is with this new set of illustrated cross-sections of America’s postcard palaces.

The President’s residence may be something of a fruit-bowl right now but in the past it has been a dignified place informed by the history of architecture and democracy. Its second resident president, Thomas Jefferson, was actually the one responsible for the Renaissance villa-inspired East and West Wings – he originally competed to design the whole building (but lost), adding the wings when he moved in. A Frenchman named Alexandre-Gustave Eiffel designed the Statue of Liberty’s iron and steel framework. Yes, that Monsieur Eiffel, he of the famous Tower. But an American, Richard Morris Hunt, designed the simple pedestal, inside which you will today find an exhibition dedicated to the history of the statue. Frank Lloyd Wright’s 1935 home design is known for harmoniously existing among the picturesque waterfalls of Bear Run. Step inside and you’ll find that it’s not just a superficial connection. Interior use of local boulders and other materials, and the intentional live use of nearby stream sounds, leave you in no illusion that you’re living anywhere but the heart of nature (albeit at its most sophisticated). Rockefeller’s ‘people’s palace’ is home to the largest indoor theater in the world. In its day, it was one of the grandest, too: Rockefeller went for broke to create a lustrous attraction to bring life back to an ailing depression-era neighborhood. Marble and gold foil, Bakelite, aluminum, and cork were the big materials of the day, and were put to use in murals, sculptures, and a spectacular auditorium that distracted wide-eyed visitors from what was actually happening on the stage (or in the economy). 11ft-high glass panels with glass benches have been added to Seattles 600ft-high signature building. It’s also home to the world’s only rotating glass floor, pairing luxury restaurants with stomach-turning views. You can buy a ticket to this one, but it’s still awesome to see it sliced open from a distance. The former Sears Tower was the tallest in the world for a quarter of a century after it was built. The cutaway reveals what kept it standing: a state of the art ‘bundled tube’ system of square tubes that strengthen each other but can bend separately to accommodate the wind. Sadly, the Sears company was not so accommodating to the changing conditions, and had to leave the building for economic reasons only a few years after moving in. 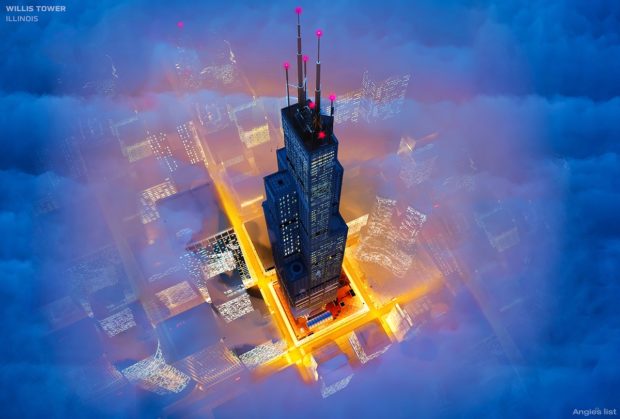 The Richardsonian Romanesque style is a type of picturesque gothic architecture inspired by some of the grand buildings of European history. The style’s progenitor, architect Henry Hobson Richardson, first trialed it with his enchanting 19th-century Trinity Church. A less picturesque part of the image is the 4000 wooden piles used beneath the building to keep it from sinking into Boston’s swamp land! The illustrator pulled out all the stops (or the plugs) for this final image of New York with its rivers half-gone. The untold story is of a lack of urban investment from the Trump government, which has the potential to cause serious economic hardship for New York’s working commuters. Still, it’s nice to see where you’re going when you take the East River or North River tunnels under New York. Which American landmark would you like to see inside?