Melissani Cave – a Home of Nymphs

There are places which are located in the depths of our planet, but still represent mystery to humans. We are talking about caves full of secrets where seems like the time has stopped forever. As an example of such a cave we are pointing out the place Melissani.

Boating with rented boats of oars through caves interior will hold your eyes constantly directed towards the large opening archway. Its impression of secrecy will stay completely written in memory of researchers. Melissani cave is located on the east coast of the Island Kefalonia in Greece. It is situated two kilometers from the town of Sami and 10 km from the town of Argostoli. This magical cave was first discovered in 1951 and opened for public visits in 1063. Melissani cave is 100 meters long. Into it flowing the eponymous lake which occupies a third of its length and attract many tourists. In Greek mythology, Melissani was known as the Cave of the Nymphs. The “roof” has two large holes and an island in the middle. Through holes of the Melissani cave enters light, so it makes the water to look so pure and it seems like the boats floating above it. 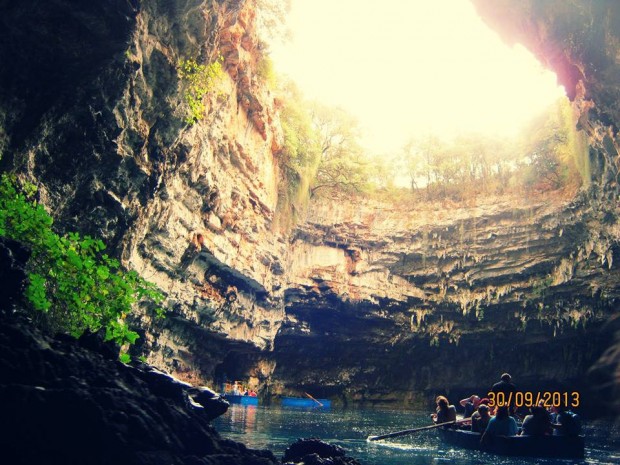 Already is known that if you want to get there you have to go through a tunnel and then with boat to float on the blue water. Interestingly is that the water at the lake is a mix of salty and sweet water. The cave is located about 500 meters away from the sea and the water level is one meter above the sea level. The mixed water springs from 30m deep cave system on one side and flowing to the other side of the cave. Scientists came to this conclusion by diving experiment performed in 1059. The best time to visit this cave is summer, at noon when the sun shines so powerful. Melissani beach it is most illuminated at that period. If this summer you decided to visit Kefalonia, you can join one of the many tours that are organized through this cave.