Walking through Seasons in the Indian Himalayas

Every change of weather brings in a different aspect of the Earth. The eternal beauty of nature ceaselessly goes on to provide the living beings with an array of pleasures. Summer, autumn, winter, and spring, all the four reasons showcase an ever-changing nature of the Earth and also gives mankind a refreshing change from the monotony of a single season.

Winter is the time when Mother Nature covers certain parts of the Earth with layers of snow. The falling temperatures not only give a new and charming look to everything but it also raises the level and number of thrills, which one can attempt to acquire from nature.

The Himalayas are the pride of India that offers so many life sustaining gifts. The indomitable Himalayas grant human beings a bountiful of opportunities to make their journey of life a worthwhile and meaningful experience. The day-to-day routine life can dull one’s senses and start to sap the energies required to carry on life happily. A holiday in the Indian Himalayas would work like a re-vitalizer to the sagging spirits of a person.

There are many ways in which one can seek to realize the mysterious allure of the Himalayas, like mountain climbing, mountain biking, jeep safari, motor biking and river rafting. Among them trekking is the most interesting way to interact with nature and bask in its magnificence.

Given below are some of the most famous and appealing treks lying in the glorious Himalayas of India:

Chopta Chandrashila trek is 5 km long, commencing from a village called Chopta and ending at the Chandrashila peak (4000 meters above sea level). Situated in the Garhwal division of Uttarakhand, the starting point of the trek (Chopta) leads the trekker to the ancient shrine of Shiva known as Tungnath. Believed to be a thousand years old, the temple is one of the Panch Kedar temples and is the highest (altitude wise) Shiva temple in the world. Panch Kedar refers to a group of 5 Shiva temples belonging to the Shaivite sect, all of which are located in the Garhwal Himalayas (Uttarakhand). After basking in the holy atmosphere of Tungnath, one needs to undertake a steep trek of 1 km to reach the finishing point of the trek, i.e. the Chandrashila summit. The conclusion of the trek will be rewarded by the breathtaking views of the peaks, which encircle Chandrashila, like Bandarpunch, Nanda Devi, Chaukhamba and Trisul. Camping and trekking in Chopta Chandrashila is famous because of the marvelous terrains that the trek passes through.

Located in the Zanskar region of Ladakh (Jammu and Kashmir), this trek can be called the mother of all treks. The Frozen River Trek or Chadar Trek begins from Chilling and ends at Zanskar valley after trekking for a distance of 70 kms. During the winters, the conventional routes of travel get inaccessible due to heavy snow, while during the months of January and February the Zanskar River freezes, making treading possible. This route was used by the natives of the valley since ancient times to carry out their routine life in a hassle-free manner. These days, it’s mostly the adrenaline junkies, who seek it to reach the zenith of excitement. The climate is biting cold, as average day temperature is about -10 degree Celsius and the temperature at night falls to -25 to -30 degree Celsius. Trekking on the frozen path created by the river is a very challenging task; there is the harsh climate in which one has to tread on a sheet of ice, which can be thick or thin, at certain places, and under which the Zanskar River flows unstopped.

A trekker would also get the opportunity to experience life as a caveman as some of the night stays would include staying in caves with a bonfire which provides light and warmth. The trek usually takes 22 days to complete but one can choose to have a shorter trek which may take 12/13 days to complete.

Snow Leopard Trek… in the midst of wild Ladakh

Snow Leopard Trek goes through the Hemis National Park, which is located on eastern side of Ladakh (Jammu and Kashmir). With an area of 4400 sq km it is the largest national park in South Asia and many trekkers embark on this trek in search of snow leopard in India. Snow leopards are an endangered species, which are found in the mountains of Central Asia, usually having an altitude of 3,350 to 6,700 meters. The possibility of sighting a snow leopard is higher in winter as they tend to come down to lower altitudes in search for food. Apart from snow leopards the park serves as an abode to other threatened species like Tibetan wolf, red fox, Asiatic ibex and Eurasian brown bear along with other species of mammals. Though the expedition emphasizes on snow leopards, the park is also a bird watchers delight as it has many local and migratory birds to please sore eyes. Within the periphery of the park lie around 6 villages, several Gompas and Chortens. There is a 400 year old Hemis monastery which is the largest such institute in Ladakh and holds a very respectful place.

Trekking on the snow leopard trek is an adventure, which encompasses beautiful surroundings, wild animals, culture and traditional lifestyle of remote villages of Ladakh and the peaceful and pious environment of the Buddhist structures.

Though considered an easy route to trek, Dodital trek becomes more interesting and challenging during winters. Dodital is a freshwater lake, lying at an altitude of 3024 meters and is surrounded by the magnificent Himalayas in the Garhwal region of Uttarakhand. The trek begins at Sangamchatti and after trekking for 21 km, one reaches the pristine waters of Dodital Lake. 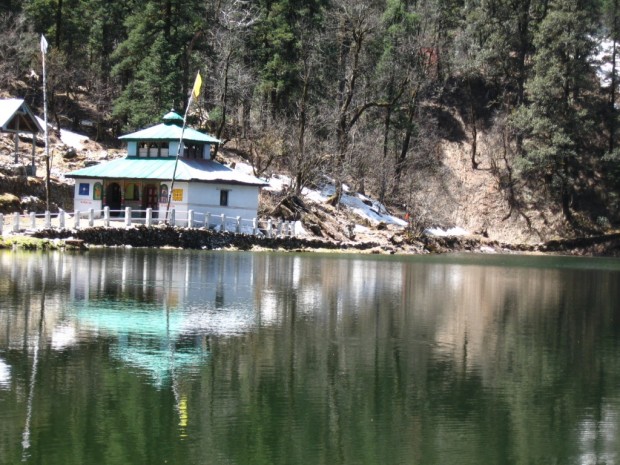 A trekker would find pleasure in traversing the meadows, streams and forests on the way, most of which would be covered with snow, making the walk more lively and adventurous. Deodar, oak, and rhododendrons trees encircle Dodital and in winters when everything else gets buried under the sheet of ice, it’s the celestial Dodital, which is visible in its original form.

Auli Gorson Bugyal… made for the amateurs

Auli Bugyal (a meadow) can be reached in 3 hours through a cable car from Joshimath. Covering an altitude of 2500-3050 meters above sea level the snow covered slopes of Auli are considered the longest in the whole of Asia. Auli also presents a great vantage point to treat the eyes with the mesmerizing peaks, which envelops the meadow, like Doonagiri, Hathi Parbat, Nar Parbat, Neelkanth and Nanda Devi. Gorson Bugyal is located further higher at an altitude of 3056 meters and a trek of 3 km from Auli would bring one here. The 3 km treats you with the majestic sight of the Himalayas while passing through the forest of oak and conifer trees. One can choose to ski or camp over the snow covered slopes amid the refreshing snow-clad mountains, energizing every cell of the body. The Indian Himalayas replenish one’s battered senses and also give a gift of memories to cherish lifelong. So come here to swing to the rhythm of life, the natural rhythm we were born with. Plan your winter adventure holidays in the Himalayas and get ready to be blessed by it! Trekking Tribulations – How To Pack For A Hiking Getaway →